Two weeks ago our dog Frodo passed away. It is a wound I still carry with me. While he will never return, by sharing his memory he is never completely gone either. These are some of my favorite Frodo moments. 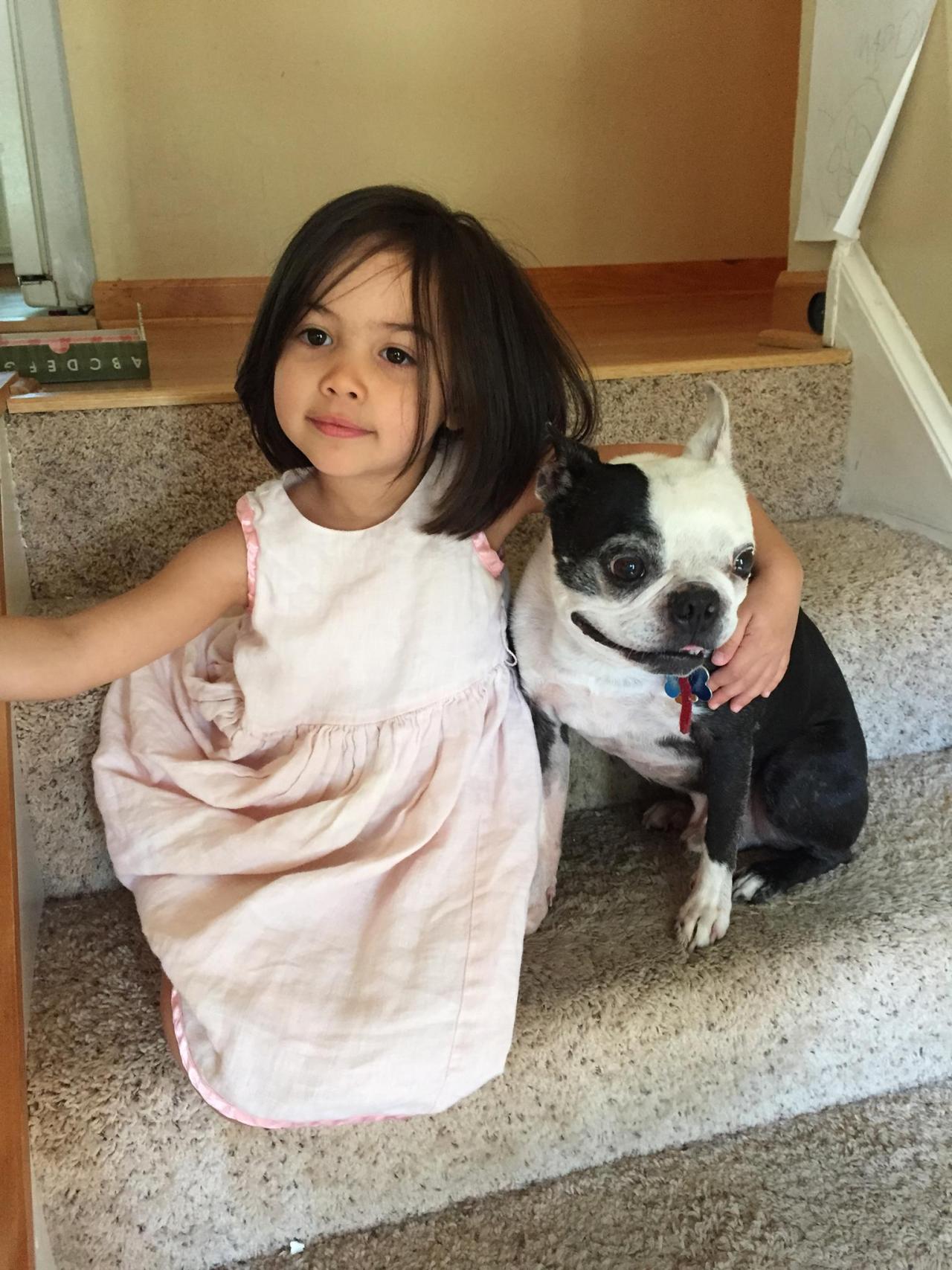 Frodo loved humans intensely and indiscriminately. Sit still for a moment and Frodo was likely to plop against you with violent force. Virtually everyone loved him right back immediately. Our youngest niece particularly adored him. 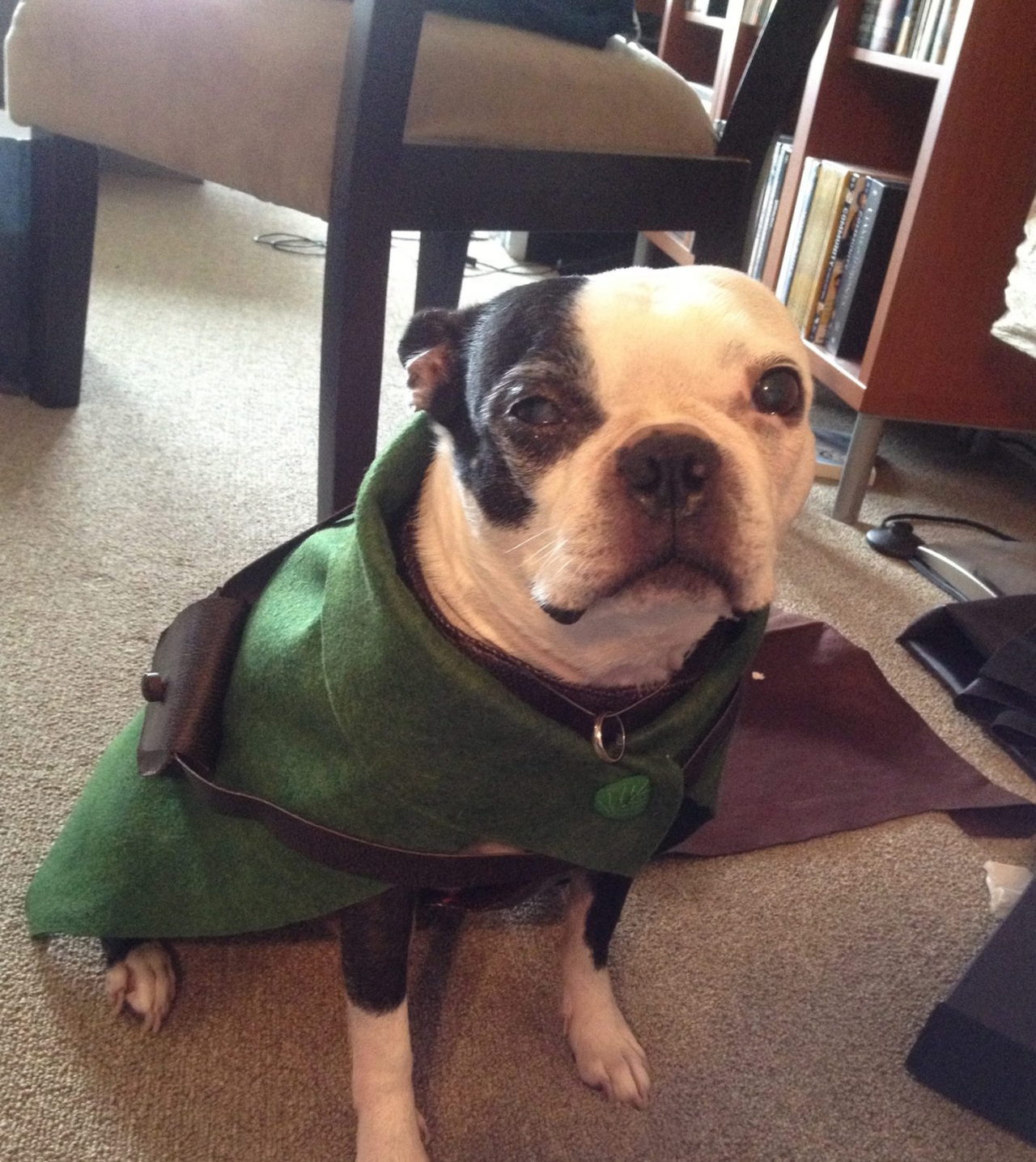 Frodo dressed up as Frodo for Halloween. He was a tremendously good sport about it. 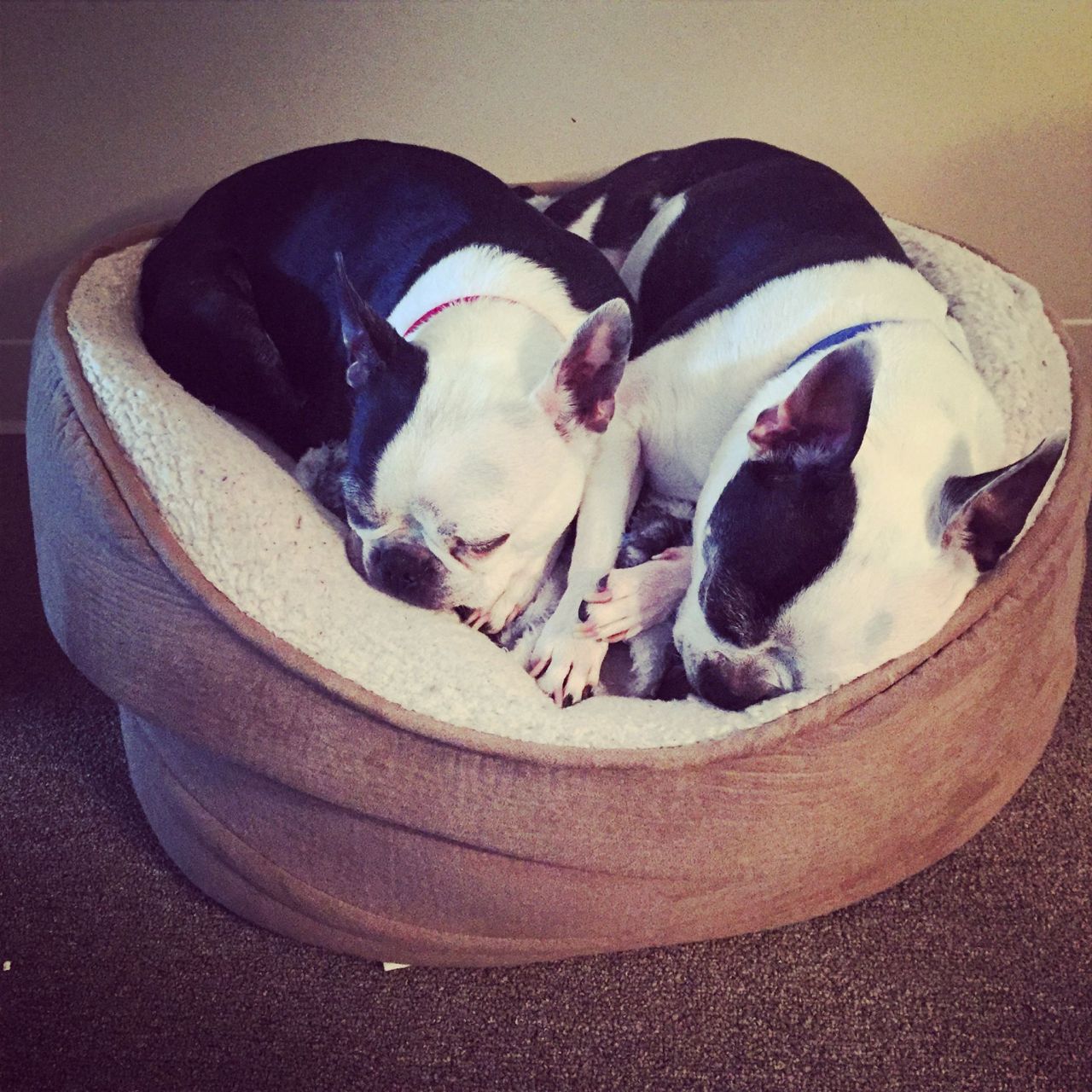 Frodo and his sister Sam were inseparable. We bought multiple dog beds - they usually went to waste as the dogs would rather be near one another whenever possible. 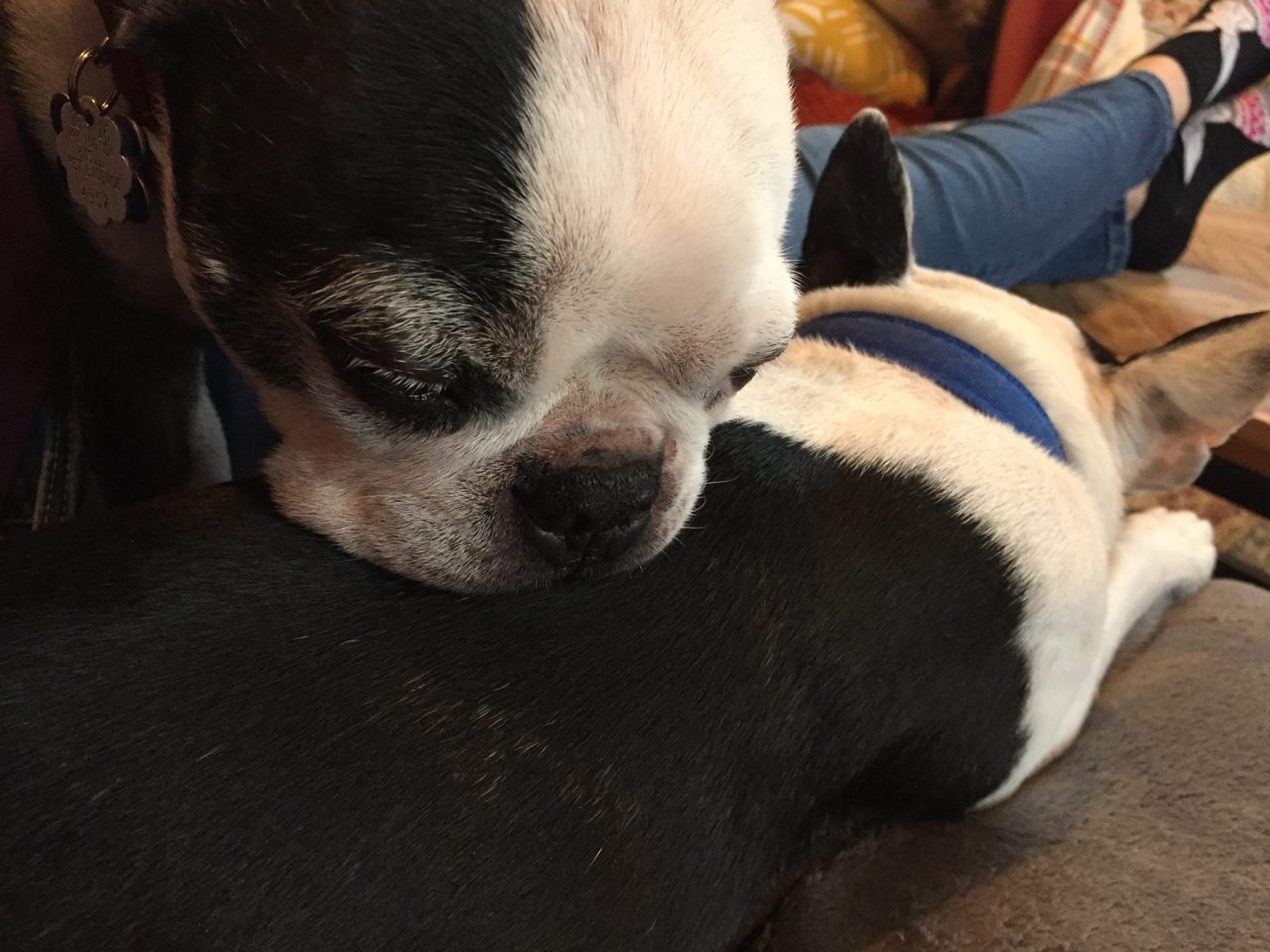 Seriously, they were inseparable. 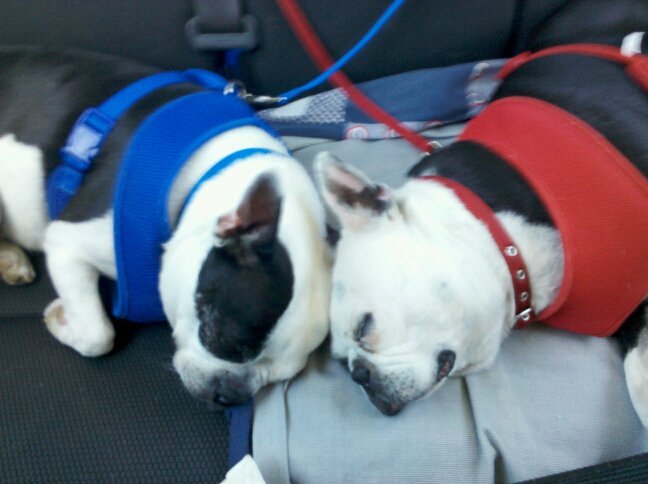 This is one of their first car trips after we adopted them from Midwest Boston Terrier Rescue. It would take Sam awhile to adapt to a new home with new people, but Frodo was loving and welcoming from day one. 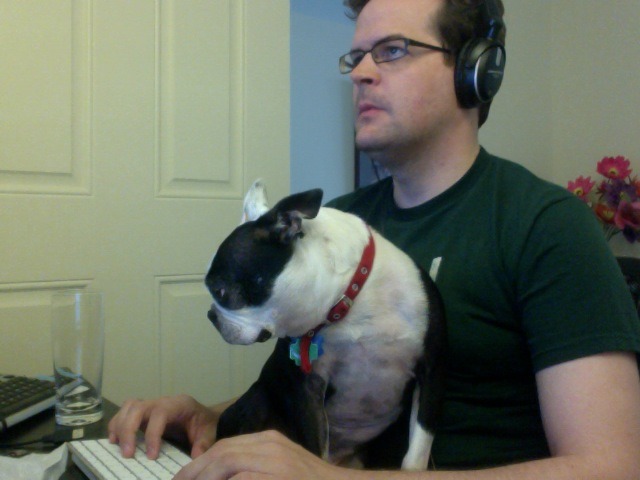 Anytime I was on video conference at home, as I was in this photo, Frodo was very likely just out of the camera. Apologies if you saw his ears or heard his snoring.

This is how I will always remember Frodo. For him, “come” was an easy command. “Stay” was the challenge - it meant being far from Allison and me. 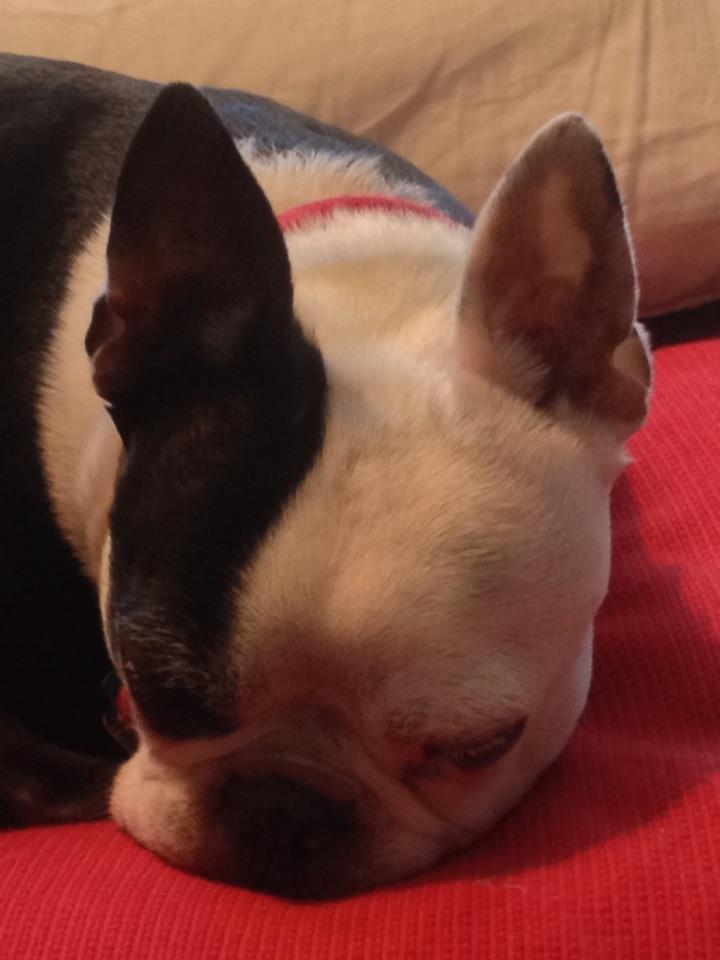 I miss you so much, buddy. I am glad to have had the time together that we did. I am all the better for it.

you are the best

Mark Kanemura is amazing for choreographing and performing this. Still cannot believe that Jenna was cut for this performance - democracy stinks sometimes.

Dead Authors Podcast Chapter 13 - Paul F. Tompkins as H.G. Wells, Matt Gourley and Jeremy Carter as the Brothers Grimm who are discussing their fairy tale, The All Fur.

Grimm Brother 1: He is lying on the death bed of his wife and she says, ‘Never marry again.’ And he promises, ‘I will not, unless I find someone as beautiful as you and that’s the one loophole okay?’ And she says, ‘Oh yeah that seems fair.’ And so he goes, ‘Well, no one is as beautiful as her except for my daughter, so that seems okay. I will marry her.’ And she says ‘Hold on a minute, girlfriend.’ She was smart and said, ‘Not unless you give me three gowns. One must be gold as the sun and silver as the moon and the other as the bright as the stars. Oh, and also I need fur from every animal that ever existed.’

H.G. Wells: That ever existed?

Grimm Brother 2: Ya. It’s like a Noah’s ark dress.

Grimm Brother 1: Yes it is. That’s exactly it.

H.G Wells: So this is one giant fur, it’s not that she just wants one of each?

Grimm Brother 2: Yeah, it’s not like this is my dinner stole and this is my breakfast fox. It’s all one thing.

Grimm Brother 1: Yeah, get it done. The whole thing. So long story short, he says okay, I’ll do it and he does. All right? And she’s like-

H.G Wells: Wait, I’m sorry how does he do that?

Grimm Brother 1: Well, we don’t include that part.

Grimm Brother 2: It seemed like too many set pieces. So we just went simpler.

Edge of the Empire Review
Posted in roleplaying

The Edge of the Empire roleplaying game by Fantasy Flight Games, much like its oft-discussed dice, is a mix of success and failure. Its ideas are simultaneously brilliant and half-baked. It’s a system that will help players and GMs collaborate on exciting and unexpected adventures. It’s also a system that requires extensive house ruling and often contradicts itself. After two years of playing I can’t exactly recommend it, but I also won’t stop playing it anytime soon.

The rules are simple enough at a high level. Characters have “characteristics” which represent your natural abilities and derived skills that they can train. When you’re doing something exciting and challenging, you combine characteristics, skills, talents, and gear to build dice pools via FFG’s signature design flourish, custom dice.

Each type of dice that goes into a dice pool represents a different aspect of the current situation which helps or hinders your efforts. Two kinds of positive dice represent natural ability or additional training, and two kinds of negative dice represent inherent and exceptional difficulty. The GM calls for additional, smaller dice to represent situational modifiers like poor light, helpful gear, or adverse conditions.

Baking concepts into the dice results like “success with complications” and “failure with advantages” makes it easy to keep the narrative moving and exciting. The system allows players to pick the effects of positive advantages which helps players contribute to the story without being overwhelmed. Adding dice to represent situational difficulties is an extremely clever workaround for the endless tables of modifiers that have plagued GMs for ages. For each different complicating factor, just add a “setback die.” For each helpful factor, add a “boost die.” An entire category of bargaining and discussion that dominates checks in so many other games is entirely removed.

With Edge of the Empire though, the devil’s in the details. Each skill has specific rules for interpreting success, failure, advantage, and threat. These rules are obtuse and often contradictory. Sometimes Successes grant time reduction, other times Advantage grants that. Some skills treat Threat as a secondary failure condition while others create side effects with them. The skills themselves are also often confusing with overlapping or vague descriptions. Exciting moments frequently lose momentum in order to debate Cool vs. Vigilance vs. Discipline or Athletics vs. Coordination.

This becomes ludicrous with the addition of gear. A fair amount of gear comes with varying options between “low end” and “high end” models that are rarely spelled out in terms of mechanical impact to gameplay. When gear actually gets mechanical rules, they also contradict one another. After two years I still forget whether to upgrade or downgrade Medicine or Computers checks based on the presence or lack thereof of the associated tools (for the record, Medicine checks without a kit are downgraded — Computers checks with a kit are upgraded). And don’t get me started on the bonkers rules around first aid kits, stimpaks and emergency repair patches…

Edge often feels like an unfinished project despite three different versions of the core rules and countless sourcebooks for expansions. The high level ideas are great and help create an atmosphere of swashbuckling adventure as long as you do the legwork of deciding what subset of its’ confusing rules you’ll be playing with. Each of the three core rulebooks went through an extension “beta testing” process, so I am baffled at the inconsistencies that run throughout this game.

If you are gung-ho for Star Wars, by all means pick up one of the generous beginner boxes and try it out. Despite all my complaints, it’s a system I will keep running and keep hacking. Once you find your group’s version of Edge of the Empire, you’ll still have a grand adventure.

As I said when introducing my compact NPC character sheet, I hate clutter at the table. The FFG vehicle sheet is fantastic for my players’ ship as they want to track everything at a fair level of detail. Not only is that overkill for most NPC vehicles, but I also don’t want to have to remember “Okay, now which NPC sheet is the driver of this vehicle again?”

I made an combined sheet that condenses the most critical information on NPC vehicles and their crew. You can see it in action with the stats for a “CSA TAST-A”, a somewhat crap airspeeder used by CorpSec planetside police in my campaign: 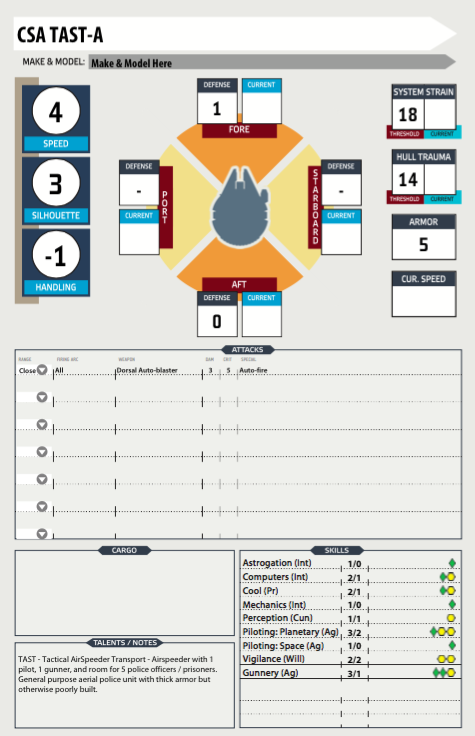 A few notes about this sheet:

Changes or suggestions are welcome! All the tools I used to make this are free to use, and all the original materials are available for download or modification in the Github repository. Pull requests are welcome!